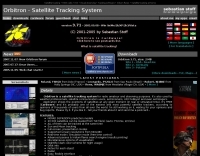 The DXZone is the largest human created and maintained library of web sites dedicated to Amateur Radio, currently lists 20.000+ links organized into 600+ categories and subcategories. Ham Radio operators review new sites every day since 1998, for potential inclusion in the Directory, and to evaluate the best place to list them.

Free for your Site

Add our Daily Top 10 links gadgets to your site